It’s been a very busy few weeks here at Stockdale Fencing! As a matter of fact, I would say a very busy few months, with the build up to Christmas always proving to be the busiest period for any Cheshire fencing contractors. Just to prove we have actually been busy with various projects, I thought this would be the perfect platform to display just a small selection of various post and rail fencing, horse fencing and various other fencing contractor projects we have been up to recently…

I’m sure by now you have probably come across the confusing new A556 single carriage way road on your way back from home Manchester right? After originally starting the project in November 2014, work is still being carried out to create a modern dual carriage with one single road offering facilities for pedestrians, cyclists and horse riders.

Only a couple of miles away from Northwich, Marston is surrounded in 350 hectares of the postcard-backdrop of the beautiful Cheshire countryside. Located on the Trent & Mersey canal, Marston is famously known as home to the industrial lion salt museum.

Appointed by the parrish councillor, Stockdale Fencing were tasked with supplying and fitting new post and rail fencing with horse netting to surround the new car park at Marston Village Hall. With a short turnaround, Stockdale Fencing also erected new galvanised entrance gates to allow better access and security for the car park.

Based in Congleton, Cheshire Somerford Park Farm is home to one of the country’s leading equestrian school venues offering training on all weather surfaces across a immaculate 80-acre cross country course. Owned by Andy Heffernan, the farm is a successful competition livery yard having hosted numerous high profile international events as well as developing quality horses to buy.

As a local Cheshire fencing contractor, we first erected post and rail fencing across the 80-acre cross county farm with other aspects of the job also including the installation of wooden gates for access along with implementing electric fencing to prevent the horses from chewing or damaging the newly installed fence.

If you are a Cheshire based livery yard or equestrian who are looking to replace or erect new fencing, why not get in touch with the post and rail fencing experts to discuss the right fencing options for you.

So what happens next…

So has you can see, the day in the life of a Cheshire fencing contractor is a very varied experience from one day to the next. With it only being a few weeks away from Christmas, we urge you to act now if you are looking for any post and rail fencing services over the busy period or heading into 2017. Contact your Cheshire fencing contractors on 07883 339617 or drop us a quick email at info@stockdalefencing.com 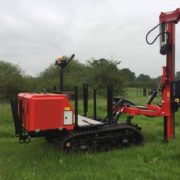 Protecting your post and rail fencing against the elements